What names or places have always fascinated you?

For example, anything that has big in the name always makes me ask myself “What’s bigger?”

Big Sky Country, the American State of Montana’s self-description, makes one wonder whatever, for example, the Australians must think.

Britain is rich with the memorably odd.  The respective villages of Over Wallop, Middle Wallop and Nether Wallop in England’s beautiful Hampshire countryside are curiously named to say the least.  Mind you, that’s not a patch on Crapstone, Penistone, Titty-Ho, or Pratt’s Bottom.

Staying on theme, Denmark offers Middlefart.  Then we have Hell, Michigan and Hooker, Oklahoma.  (Yes, shameless commerce above all, the delightfully cheery, typically ladies-of-a-certain-vintage who staff the shop of the Hooker Chamber of Commerce shop will happily sell you a tee-shirt.  See link, below.)

Of all the weird and wonderful names, Timbuktu tops that whole list.

One of the odder references came from an Australian temporary secretary we had in my London office. She told me of the Aussie children’s song, The Sailor Went to Sea, and this utterly weird lyric:

Why is that so odd?

Timbuktu sits in the middle of the desert, the Sahara to be precise, and almost as a figment of one’s imagination.

In my childhood (yes, Virginia, despite popular opinion that I’ve always been at least 50, I was a child once), I recall a geographically mind-bending ditty about a train which went from  Kalamazoo to Timbuktu.

That sent to me our globe. 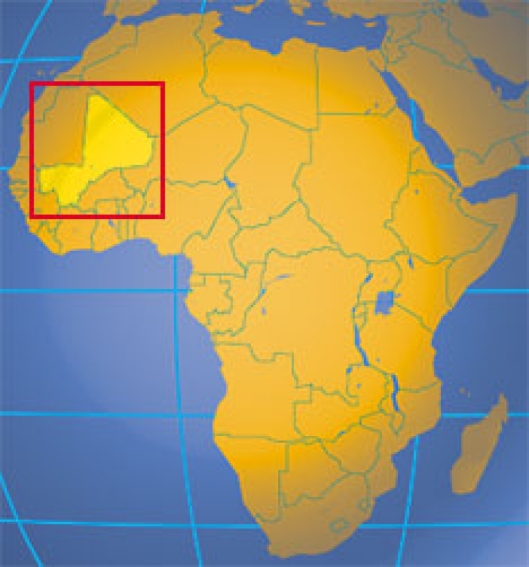 Nope, way too much ocean for a train journey.

The legendary city of Timbuktu (aka Tombouctou) is located in central Mali, at the edge of the Sahara Desert.

During the Middle Ages, Timbuktu was a very important city in the trade route; gold and other goods were shipped from Africa to Europe and the Middle East and traded for salt.

Later, when trade routes shifted, Timbuktu was known as the city in the middle of nowhere.

Timbuktu was founded by the Tuareg Imashagan in the 11th century.

(Perhaps German readers &/or dedicated Volkswagen owners can explain why on earth VW chooses to brand a car Touareg (the French spelling of ‘Tuareg’, the African tribe.)

During the rainy season, the Tuaregs roamed the desert up to Arawan in search of grazing lands for their animals.  During the dry season, however, they returned to the Niger River where the animals grazed on a grass called “burgu.”

Whenever they camped by river, they got sick from mosquitoes and stagnant water.  Because of these unfavorable conditions, they decided to settle few miles away from the river where they dug a well.

Whenever it started raining in the desert, the Turareg would leave their heavy goods with an old Tuareg woman called Tin Abutut who stayed at the well.  In the Tuareg language, Tin Abutut means “the lady with the big navel”.

With the passage time, the name Tin Abutut became Timbuktu.

The historic town of Timbuktu is located at the precise point where the Niger flows northward into the southern edge of the desert. As a result of its unique geographical position, Timbuktu has been a natural meeting point of Songhai, Wangara, Fulani, Tuareg and Arabs.

According to the inhabitants of Timbuktu, gold came from the south, the salt from the north and the Divine Knowledge from Timbuktu.

Timbuktu is the junction where the camel met the canoe.  It is to this privileged position that the city owes such historical dynamism as it once had.  In the 11th Century and onwards for a few years,  Timbuktu became an important port where goods from West Africa and North Africa were traded.

By the 12th century, Timbuktu became a celebrated center of Islamic learning and a commercial establishment. Timbuktu had three universities and 180 Koranic schools. These universities were the Sankore University, Jingaray Ber University and Sidi Yahya University.

As a major Islamic center, non-Muslims were banned from the city; a forecast of things to come.

If one can argue with a straight face that Africa ever had its own golden age, this was it.

Books were not only written in Timbuktu, but they were also imported and copied there. There was an advanced local book copying industry in the city. The universities and private libraries contained unparalleled scholarly works.

In 1893, France colonized West Africa.  Timbuktu was under the French rule until Mali received her independence in 1960.  To this day, many manuscripts originating from Timbuktu can be found in French museums and universities. 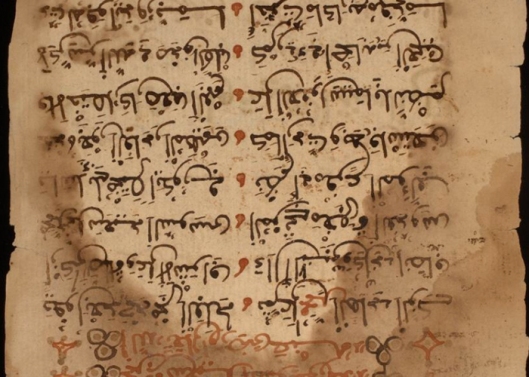 At least there they can be held safely and stored properly.

Thanks indeed to a French news source, I just ran across this:

[Screen grab of a video filmed by an Observer in Gao, in northern Mali, in August.]

To avoid being whipped, mutilated, and jailed, women in Timbuktu now have to wear black veils and loose-fitting clothing. Radical Islamists, who took control of the city months ago, are laying down their law – Sharia law – and for the first time since they’ve arrived, they’re specifically targeting women.

Over the past few weeks, Islamists from two armed groups – Ansar Dine and Mujao, who took over northern Mali in April – have increasingly made use of corporal punishment against the local population.  This includes whipping, amputations, and even stoning people to death who do not obey Sharia law.

In Timbuktu, the first amputation-as-punishment took place on September 16. Islamists cut the hand of a man suspected of having committed theft. Two months earlier, a man and women accused of having had an extra-marital affair were whipped in public.

“Four days ago, in the markets and at the hospital, Islamists began to ask women to cover their heads entirely.  [Editor’s Note: many women wore light veils that showed some of their hair].  In a message broadcast on the radio on Thursday, they also announced that women were no longer allowed outside after 11 p.m. Since then, the Islamist fighters that patrol the streets have been monitoring the women, and they hit women who don’t obey this new rule with their sticks.

“Until now, many women in Timbuktu wore light veils that covered part of their hair. But the cloth, often white, was quite transparent. The Islamists have decided women should wear a much larger veil that covers their ears, and that it has to be black. They also banned tight clothes that many of the young women wear.  Now, they’re all wearing large flowing dresses or toungous, which is a 12 metre (13 yards) long piece of cloth that is traditionally worn in the Sahel desert, on top of regular clothes.

“The Islamists announced that any woman who disobeys their rules will have her ears cut off”.

The Islamists announced that any woman who disobeys their rules will have her ears cut off and be sent to a new, all-female prison.  Though they haven’t gone that far yet, they are still quite strict: on Thursday afternoon, as I was visiting a friend at the hospital, I saw a very pregnant woman arrive. She was wearing a white veil, so the Islamists asked her to go home and change.

She explained that she was going into labour, and that she lived two kilometres [1.2 miles] away, so she couldn’t go back. She ended up giving birth outside, on the sidewalk.  [Editor’s note: another one of our Observers in Timbuktu also witnessed this. According to him, the woman and her baby were in good health after the birth.]

Since they had arrived in Timbuktu, the Islamists were rather lenient with women. They mostly targeted men, by for example forcing them to go to the mosque every Friday at noon. However, despite their violent ways, the Islamists haven’t been able to get everyone to obey them. By targeting women, they’re trying to hit the men where it hurts the most.

Where are we as a civilisation when wearing the wrong color is not a merely a fashion faux pas, but likely the reason some woman will suffer her ears being lopped off, not by a trained surgeon, but, rather, by an Islamist fascist zealot with a dirty knife that’s been used for God-only-knows-what?

What enlightened, civilized religious practice demands a child be brought into the world with his half-naked mother lying on her back amongst the flies and the indescribable filth of what passes for a pavement (sidewalk) in Mali?

Outlook?  Hopeless?  Frankly, my own forecast is that at best Mali winds up being divided or effectively so, with a hard-bitten radical Islamist (of that is not a duplication of meaning) northern tier and a less-fanatic southern tier.

Indeed, de facto this is the current position, and as this graphic shows. 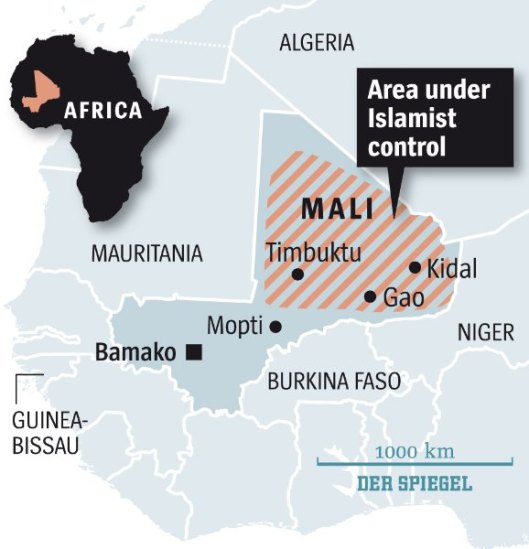 In whichever of the two tiers, it will be the females, of all ages, who will be most hard done by, or as per mountains of horrific precedents from other Islamist nations across the globe.

I’m reminded of a text penned by the Canadian singer-songwriter Bruce Cockburn:

I’ve seen the flame of hope among the hopeless
And that was truly the biggest heartbreak of all
That was the straw that broke me open
If this were the last night of the world
What would I do?

Quite beyond what the men and women of Mali can even dream, much less accomplish, the rest of the lyric defines not merely the totally different worlds, but also Western views of the worth, value and proper treatment of The Nobler, Gentler Sex:

What would I do that was different
Unless it was champagne with you?

Since the Islamists haven’t banned both music and champers where we sit, or as they have elsewhere, enjoy Mr. Cockburn’s The Last Night of the World, here:

(If this fails to play, my apologies.  Please click here:  http://www.youtube.com/watch?feature=player_embedded&v=02TUsZzF6es#!

Congratulations are in order for Bruce Cockburn who on the 19th November was awarded the Society of Composers, Authors and Music Publishers of Canada Award (SOCAN) by the Governor-General of Canada.

His Last Night of the World is on his CD Slice Of Life: Bruce Cockburn Live Solo or as a download.  ASIN: B001T6OPA0; Amazon USA: http://www.amazon.com/s?ie=UTF8&index=music&keywords=B001T6OPA0&link_code=qs&tag=cowboylyrics.com-20 and from all other Amazon sites around the world.

To hear the 1952 version of Kalamazoo to Timbuktu, please click here: http://larryandmarshall.wordpress.com/2011/03/23/kalamazoo-to-timbuktu-music-by-alec-wilder-lyrics-by-marshall-barer/ 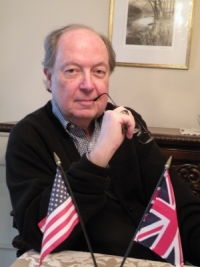